Chinese State Councilor and Foreign Minister Wang Yi warned that the Taiwan question has become the biggest point of risk in China-US relations, as he prepared for a meeting with US Secretary of State Antony Blinken in New York, which the world is watching closely to see whether and how the two major powers can navigate through the tension to avoid serious conflict, while analysts hold low expectations.

Wang and Blinken are set to meet on Friday local time on the sidelines of the 77th UN General Assembly and discuss a range of bilateral and global issues as part of ongoing efforts to maintain open lines of communication and manage competition responsibly, according to the US Department of State.

The meeting will not be a turning point in China-US tensions and the descending spiral will continue, as observers agreed almost unanimously that the US will continue its provocations over the Taiwan question and all-out strategic containment of China.

China is always the one that provides certainties and its countermeasures are all made in response to provocations. China has the resolve to ensure stable and constructive China-US relations, but “our resolve is equally firm to safeguard core interests and counterstrike with unprecedented measures in case of provocations,” Lü Xiang, a research fellow at the Chinese Academy of Social Sciences, told the Global Times on Friday.

A Beijing-based expert on International Relations told the Global Times on condition of anonymity that it is necessary and important for China to reiterate its core interests and elucidate the historical truths of the Taiwan question on the sidelines of this multilateral UN occasion when the US is mobilizing allies to join a hyping up show at the UN General Assembly (UNGA).

Several close allies of the US, including British Prime Minister Liz Truss, have erroneously criticized China over the tension.

G7 foreign ministers met in New York and jointly opposed “unilateral changes to the status quo,” an accusation the US usually levels at China.

“It was not China but the Democratic Progressive Party authority on Taiwan island and external interfering forces that are changing the status quo,” Chinese Foreign Ministry spokesperson Wang Wenbin said at Friday’s press briefing, urging Germany and other G7 members to uphold the one-China principle in words and in deeds. 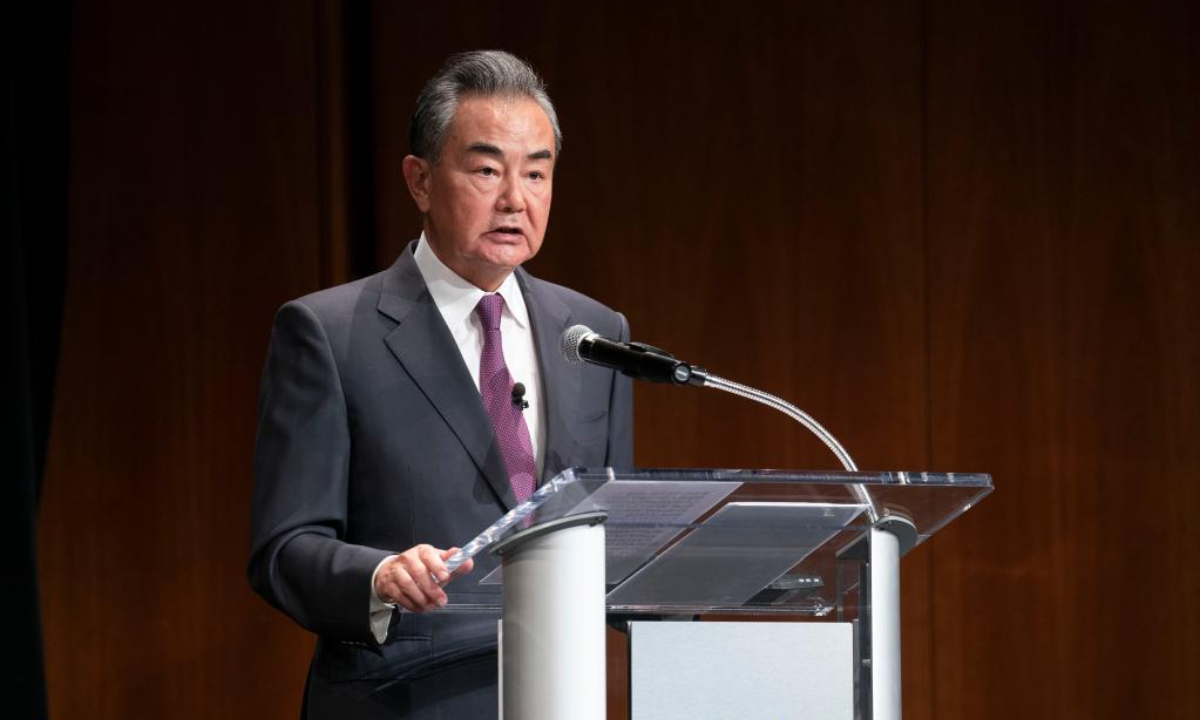 In New York, Wang Yi has been interacting with US nongovernmental organizations, including think tanks, and dignitaries including former secretary of state Henry Kissinger. The Taiwan question has been a substantial part of those exchanges.

While addressing the US Asia Society on Thursday, Wang said the Taiwan question has become the biggest point of risk in China-US relations and elucidated where the question originated and how it unfolded.

It was US indulgence that allowed “Taiwan independence” forces to spread in the island, posing the biggest threat to peace and stability across the Taiwan Straits and becoming a “gray rhino” rushing toward us that must be stopped, Wang said.

Lü said the reiteration of the Chinese stance on the Taiwan question in all those occasions may not change the stubborn US, but is still meaningful in making it clear at this moment that China is prepared for all possible scenarios.

“It was the US that has kept squeezing China’s space for operation over the past years, making the situation evolve onto a dangerous track that nobody is willing to see,” the expert said.

On the US side, Shi Yinhong, director of the Center for American Studies at Renmin University of China, told the Global Times that the US wanted to test China’s attitude on the Russia-Ukraine crisis through the Friday Wang-Blinken meeting and make sure China will not support Russian operations.

With the Ukraine crisis occupying a large amount of US resources and attention, the US cannot afford a real conflict in the Taiwan Straits with China and its possible global consequences, Lü said.

But the US will not withdraw its provocations either – it dreams of managing the tensions and gradually “adding pro-Taiwan independence content into its ‘strategic ambiguity,'” according to Shi. 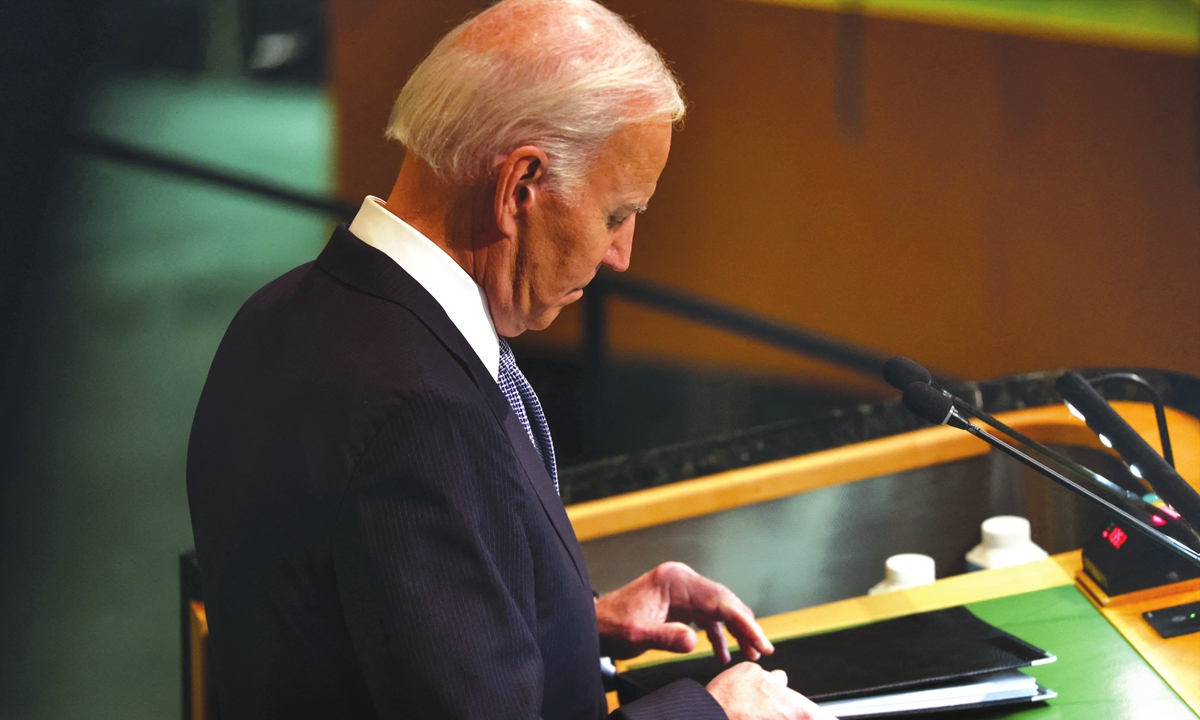 US President Joe Biden said in his speech at the United Nations General Assembly on Wednesday that the US remains “committed to its one-China policy,” even though just a few days ago he said again that US troops will “defend Taiwan” if Chinese military makes an “unprecedented attack.”

Media reported that it will be difficult for the highly provocative Taiwan policy act to clear US Congress in the current term. However, two US lawmakers proposed an “accelerating arms transfers to Taiwan act”, making Taiwan eligible for priority delivery of excess defense articles and authorizing the creation of a war reserve stockpile for Taiwan island.

Chinese observers were confused over Biden’s irresponsible remarks, saying, “With the confusion come high risks of misjudgment” especially when many dialogue channels have been cut due to bilateral tension.

Wang Yi also underlined the confusion the US has created for China and the world. President Biden made the Five No’s promise, but to our confusion, the US does not seem to be turning the leader’s political will into policy, he added.

The US amplified its ideological opposition to target China’s political system, development path and ruling party, so how can it fulfill its promise of not seeking to change China’s system? Wang Yi asked.

The US defines China as a major rival and contains China by reshaping the strategic environment and establishing small cliques, so how can it say it is not seeking a new Cold War?

The US allows its House Speaker to visit Taiwan island, continues to sell arms including assault weapons, and pushes forward the Taiwan policy act, so how can it fulfill its promise of not supporting “Taiwan independence?” Wang continued to ask.

The US imposes high tariffs on Chinese goods and now has more than 1,000 entities and individuals on its sanction list, so how can it ensure the stability of global supply chain?

After asking those questions in harsh terms, Wang Yi said that the US has a deviated recognition of China, of the world, and of itself in provoking confrontation and advocating strategic competition.

“The deviation is dangerous, and the price will be unaffordable,” Wang noted.

According to analysts, the US’ confusing remarks and deeds are rooted in the essential contradiction between its ambition of all-out containment of China and the reality that it lacks the capability to mobilize other countries and really engage in such a Cold War scenario.

This contradiction is most prominent in the US’ handling of the Taiwan question. Washington does not want to abandon the “Taiwan card” which it deems useful, yet it cannot bear the consequences of a real standoff or direct conflict with China.

In its last two transits in the Taiwan Straits, the US deployed two warships instead of one, “exposing the US’ lack of confidence and its wish to embolden itself,” said Chinese military expert and TV commentator Song Zhongping.

With China increasingly getting the upper hand in resolving the Taiwan question, the US will find it increasingly hard to interfere in the issue or use it as a bargaining chip in bilateral relations, analysts said. It is a dead end for the US, which should return to a rational and practical track in its China policy.